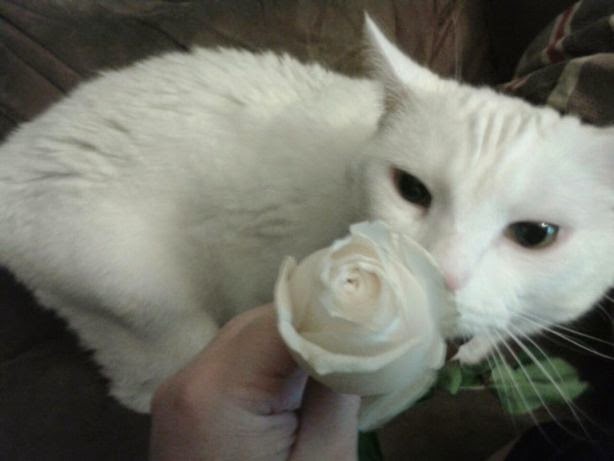 Has It Really Been A Week?

Hubby has been on vacation this week, and tonight is his last night.  He has to go back to work tomorrow night at midnight.  How has the week gone by already?  Time always flies when I have him home with me.  I get right spoiled having company and getting so much attention.

One of the best parts of having him home is that we can go out for lunch together.  Usually Hubby is in bed until time for dinner, so sharing lunch is rare.  Yesterday we went to The Blue Danube, or The Dube. 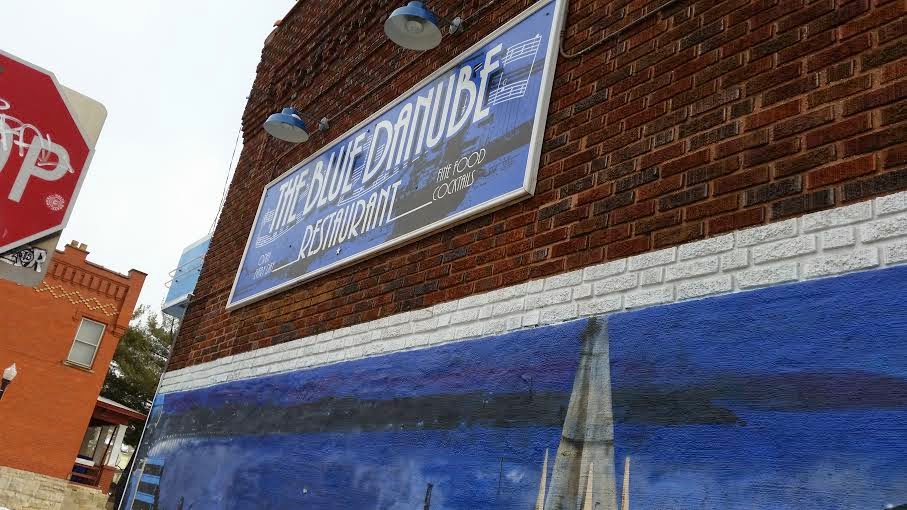 Would have included a link to their webpage, but they don't really have one.  Just some reviews on Yelp and other sites.  Seems nigh impossible, but we had never been to The Dube before.  We've known of it for as long as we've lived here, since people that like it tend to LOVE it and talk about it a lot, but we'd never gone ourselves.  Yesterday was the day.  It was a neat little place, I felt like it had real character.  Which is, I suppose, because it has been there forever and had time to build character.  The salad I ordered was a little sad looking, but I figure that maybe salad isn't one of their more popular dishes.  The souvlaki I got was delicious, though.

The next thing on our list was grocery shopping.  There was once a time where I went to the market so infrequently that going was sort of a novelty... but that ship has sailed.  It's just a chore now, something to be done on Thursday afternoons to prevent starving every other day of the week.  The only interesting thing we bought was Prosecco, which was to make these... 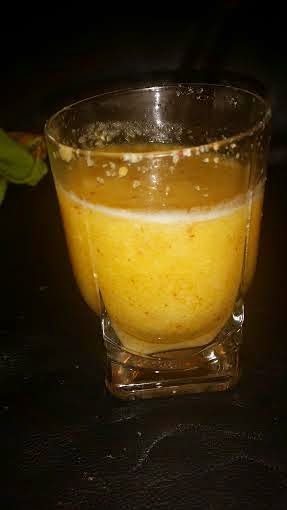 We'll call it a faux-Bellini.  It was mostly real, except that white peaches are not to be found at this time of year, so it was necessary to sub regular peaches.  I got the inspiration to make them off a show on Cooking TV, and felt I had to try them.  My verdict was:  Yum!  Hubby's verdict was:  Has the texture of pulpy orange juice and is gross!  So we had differing opinions.  The bright side to this was that I drank 3 of them, since he wanted none.  The only thing I will do differently when I make them again is to process the peaches into liquid and then store them in the fridge for a few hours so it can be good and cold, along with the cold Prosecco.  Of course, if you are one of those lucky folks that has ice in your freezer, tossing in a cube would solve the problem.  We, unfortunately, have the tiniest fridge ever and no room to store ice in the freezer.  {I'm also wondering if using frozen peaches would be an option.  Anyone have an opinion?}

In between the grocery shopping and Bellinis, there was a coffee date with a good friend.  Hubby and I are going to a prom-themed party at the end of March, and my dear friend was bringing her collection of shawls for me to peruse and choose one to wear with my dress.  She walked into the coffee shop with both arms loaded with shawls, and holy moly did she have some gorgeous ones!  We narrowed it down to about 6 possibles, then narrowed it from there down to 2.  I brought those 2 home to try with my dress on, and narrowed it down to one.  This is the one I chose... 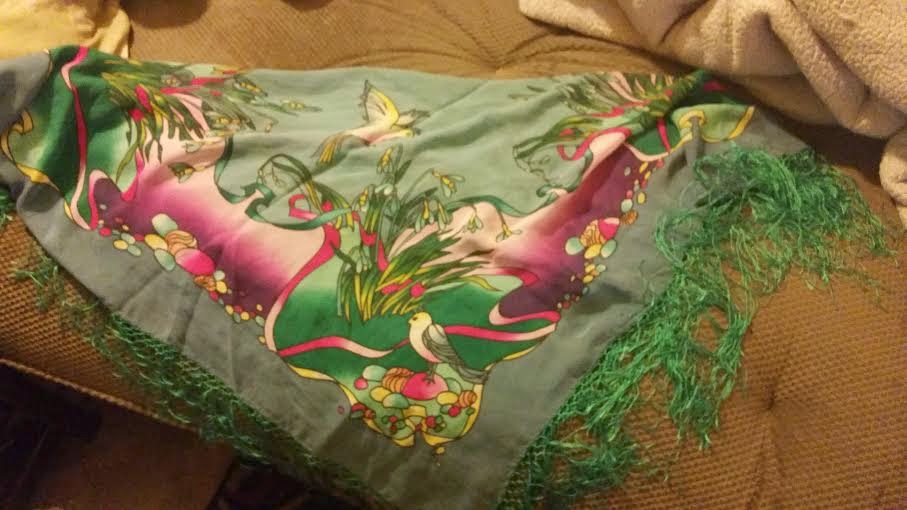 Isn't it lovely?  Here's the dress I will be wearing it with... 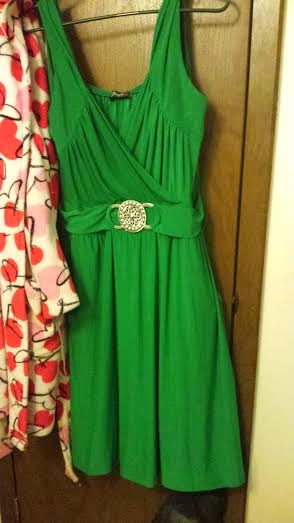 They match perfectly, and the shawl is just gorgeous.  She's just the sweetest friend, and I'm confident I'll have the prettiest shawl at the prom-party!

Today I drug Hubby out to some thrift stores.  I was on a mission to find some shoes for the prom party.  Because it is anathema to me to pay full price for nearly anything, I was determined to find a pair at a thrift store.  It's perhaps a little odd... though I prefer "quirky"... but I really enjoy the hunt for the perfect item at Goodwill.  Fortunately it only took 2 thrift stores to find treasure.  I found these... 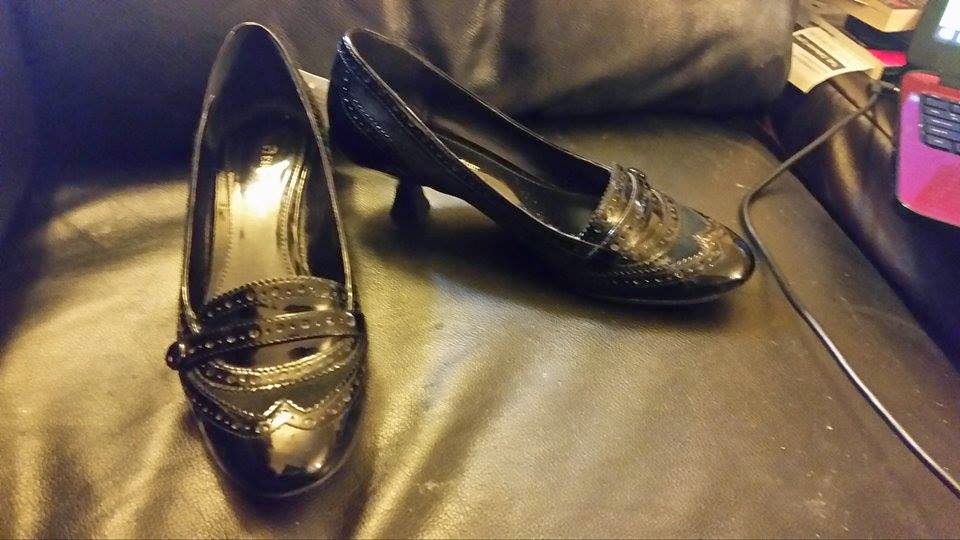 They were basically exactly what I was looking for.  Just enough heel on them, without having so much that my tootsies would be aching 5 minutes after arriving at the party.  Also, for anyone that has some kind of fetish hearing about other people's thrift shopping... I found a cast iron skillet that will be the perfect size for searing steaks before cooking them in the oven.  It was a very successful day.

Tonight was the last dinner Hubby and I were going to get to enjoy together before his vacation ends, and I'm happy to say it turned out extra good.  Fully worthy of a last-vacation-dinner.  We made this Creamy Chicken Enchilada recipe, and it was delicious.  The recipe just called for cooked chicken, but I decided to flavor up my chicken when I cooked it.  I sprinkled some bbq seasoning on the breasts and let them set in the fridge for a couple hours, then poached them in some chicken broth.  Hubby shredded those up for me while I got the other stuff ready, and we got it in the oven.

Before we cooked anything, though, I took some leftover cilantro and chopped it up {working hard to master proper technique!} and mixed it into some jarred salsa.  Popped that in the fridge to set while we got everything else ready.  Then, Mexican restaurant style, we munched on chips and salsa while the enchiladas baked.  All in all, it was a delicious dinner and only needed some margaritas.  Unfortunately I like my margaritas frozen, and this brings us back to my earlier problem -- No ice.

Now I am off to enjoy my last full night of having Hubby home with me.  Have a good night, all!
Posted by Unknown at 7:08 PM